The Story of Gonzaga Middle School

Over the last thirty years as the history and success of Jesuit Nativity schools became known across North America, several people approached the Jesuits in Winnipeg and at St. Paul’s High School (SPHS), in particular, about the possibility of founding a similar school in Winnipeg’s inner city. Nativity model schools have had very significant success in breaking the cycle of poverty through educating students from low income families living in neighbourhoods where poverty and its social impacts affect the educational opportunities of children (see What is a Nativity School? for more information). 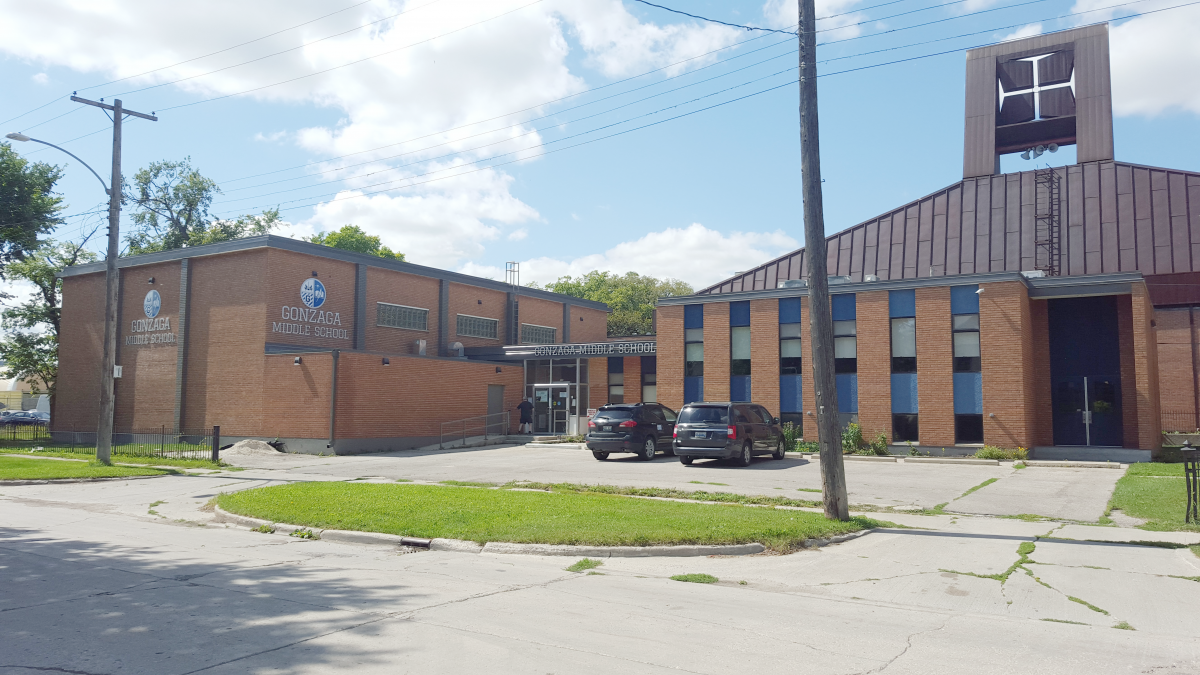 Although there was consistent interest in starting a Nativity model school in Winnipeg over the years and especially from within the SPHS community, the necessary circumstances and commitment only emerged more recently. Mr. and Mrs. Paul Hill from Regina, Saskatchewan were honoured at the November 2012 St. Paul’s High School Ignatian Tribute Dinner for their commitment to service, and for reflecting the ideals of a Jesuit education as living examples of being Men and Women for Others. Among the many expressions of their generosity and service, the Hills were instrumental in founding Mother Theresa Middle School (MTMS) in 2011 as Canada’s first Jesuit endorsed Nativity school serving the North Central Regina neighbourhood. At the Tribute Dinner Paul Hill shared the story of why he and his wife Carol helped to found the school. He noted that they were inspired to found MTMS following a meeting with Mother Theresa herself, who counselled them and other business leaders to “identify a need in your community and then give yourself and your resources to fill this need.” He also encouraged the establishment of a similar school in Winnipeg.

The seeds planted at the dinner sprouted renewed interest among key members of the St. Paul’s High School alumni community for starting a similar school in Winnipeg. After an initial visit to MTMS by Mr. Mark Chipman, a group of SPHS senior administrators and additional SPHS alumni visited MTMS in the fall of 2013. Inspired and encouraged by what they saw, this group then travelled to visit Nativity schools in Milwaukee and Chicago. The senior administrators of SMA also visited MTMS in December 2013. These visits solidified belief in the Nativity school model and strengthened hopes for a similar school in Winnipeg. A Working Committee involving these people was established and in July 2014 Mr. Tom Lussier was hired as Project Director to conduct a year-long feasibility study on starting a Nativity school in Winnipeg. After the completion of Part I of the GMS Feasibility Study, with the encouragement and support of the NativityMiguel coalition, MTMS of Regina, the Canadian Jesuits and SPHS, a decision was made in the spring of 2015 to go forward with establishing Gonzaga Middle School in the Point Douglas neighbourhood of Winnipeg.

Individual and Community Support and Partnerships

GMS was incorporated in July 2015 with three founding members including Mr. Mark Chipman as Chairperson, Mr. Bob Puchniak as Vice-Chairperson and Mr. Steve Chipman as Secretary. They continue to serve on the Board. Initially, the Board also included Fr. Len Altilia SJ, President of SPHS and Provincial Assistant for Secondary and Pre-Secondary Education for the Jesuits in English Canada, Mrs. Connie Yunyk, the President of St. Mary's Academy (SMA), and Mr. Tom Lussier, past Principal of St. Paul’s who was hired as the first Executive Director and Principal of GMS. These Board Members constituted the Working Committee prior to incorporation. Since then, Dr. Niigaan Sinclair, Native Studies Professor at the University of Manitoba and Dr. Jerome Cranston, Associate Professor, Faculty of Education, Executive Director, Student Academic Success also served on the Board of Directors. In November 2016, Mr. Kyle Mason, founder Executive Director of the North End Family Centre joined the Board. More recently, Mr. Kevin Booth, the new President of St. Paul’s High School, Mr. Mitch Bourbonniere, Social Worker and well known neighbourhood supporter, and Ms Tara Zajac, Executive Director of the North Point Douglas Women’s Centre have been added to the Board. Additional Board members may be added as needed.

Strengthening Relationships with the Community

GMS will continue to meet with community leaders in the Point Douglas and North East Downtown neighbourhoods and build relationships with the community.

The history of GMS is a story that is just beginning to be written.

Gonzaga Middle School of Winnipeg supports children from low-income families to help them develop to their full potential, to break the cycle of poverty and to become leaders for the service of others through its delivery of an enhanced Manitoba Education approved curriculum in a Jesuit Nativity-model middle school education. It is only with the support and engagement of the local community, GMS Board and Committee members, alumni of SPHS and alumnae of SMA, the larger Winnipeg community and people of many faiths and backgrounds that GMS will thrive and serve its mission.

As an independent school in Manitoba, GMS will not receive any school funding from the Province for its first three years of operation. Given that it serves low-income families and provide an extensive program of additional support, enrichment and resources to students without tuition, it is only through growing a broad cross-section of philanthropic support from individuals and corporations within and beyond Winnipeg that GMS’ history will continue to be written. Consider being part of that story – fulfilling potential – one student at a time – by making a contribution through volunteering your time or donating directly to GMS.

Meaning of the GMS Crest 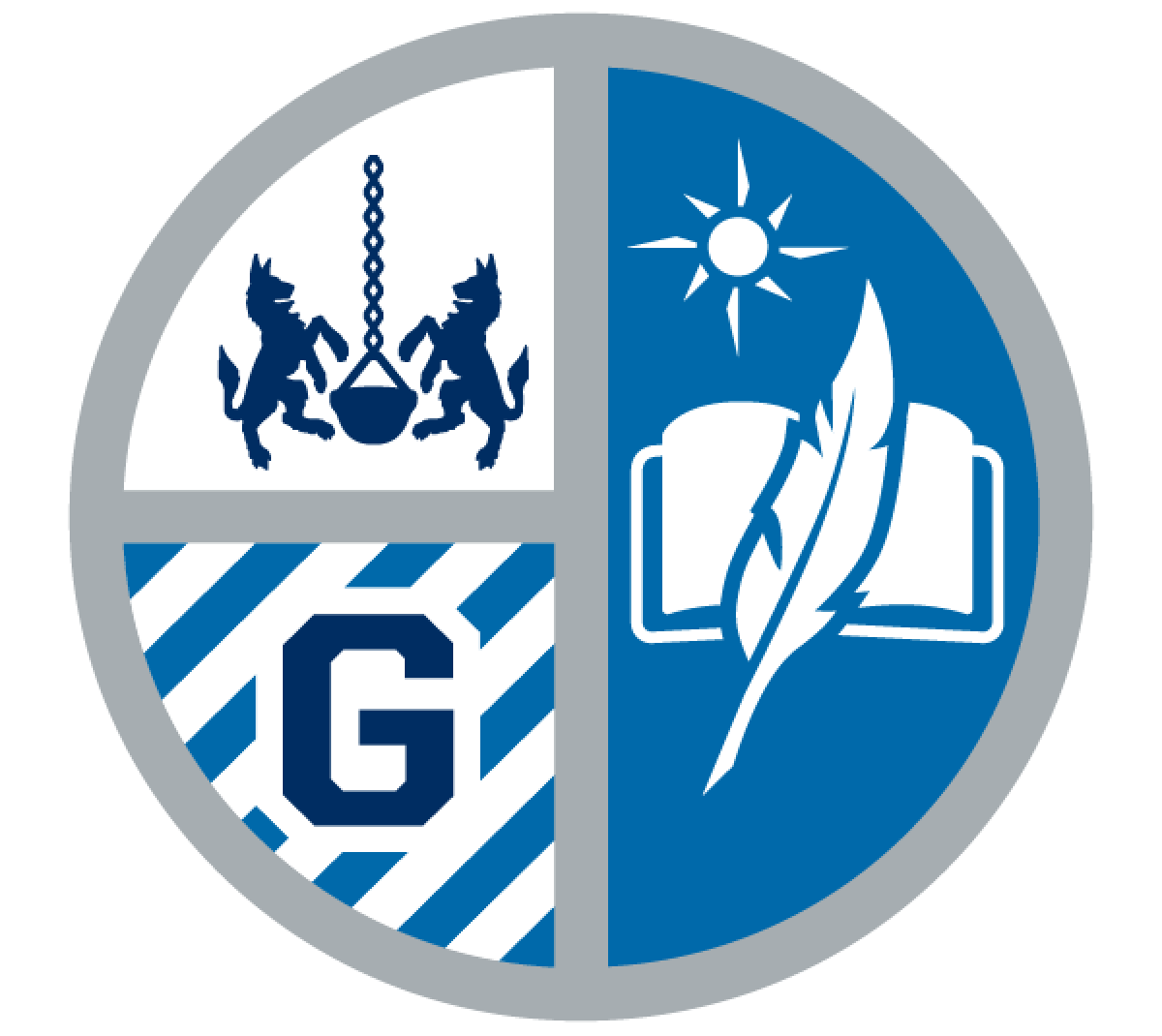 The Dexter/right side (from the point of view of the wearer) is typically reserved in heraldic designs for familial lineage or heritage:

The Wolves and Oil Pot in the upper left, and the Seven Bars awarded for bravery, one for each of the sons of Loyola, are traditional symbols of the Loyola family. St. Ignatius Loyola is the founder of the Society of Jesus – the religious order that has endorsed GMS.

In addition, the G for St. Aloysius Gonzaga, SJ, floats over the seven bars, contextualizing him specifically as the patron saint namesake for GMS. The wolves have also been chosen as the GMS team name and logo (see team logo explanation here).

The Sinister/left side (from the point of view of the wearer) is reserved for the crest wearer’s specific symbols:

The sun has multiple meanings: it represents life giving energy needed to bring forth life and provide food for the earth; it represents the light of education and understanding which are essential in helping us be good stewards of creation; and, in the Jesuit tradition, the sun in the main element in the Jesuit logo – representing Jesus.

The quill pen and book specifically show that GMS is a school and represent learning, knowledge, communication, writing and education.

Division in Half and Along the Centreline

The division of the crest in half in the Dexter and along the Pale/Centreline: references the convergence of the Assiniboine and Red rivers, or “the Forks” and provides a local Winnipeg context to the design that speaks to the history of aboriginal and European people, waves of immigration to the city and its founding economic activity.

The Forks was a traditional meeting place of Indigenous Peoples has a rich history of early Indigenous settlement, the fur trade, the advent of the railway, waves of immigration and the Industrial Age. Today it is both a heritage site and the number one tourist destination in Winnipeg as well as the site of the new Canadian Museum of Human Rights. http://www.theforks.com/about/history

Circles have been used in many cultures with many meanings; being inherently non-hierarchical and inclusive, they represent respect, equality, continuity and interconnectedness.